Every year the FM 1960 Parade Committee holds several events to raise money for the Scholarship and Education Fund. Those events include the FM 1960 St Patrick’s Parade now in its 42nd year, A golf tournament, a BBQ cook-off and Comedy Night.

The proceeds go to keep our learning facilities up to date and most importantly to provide scholarships to deserving students. Out of the 27 students in the current Paramedic Class, eight are on partial or full scholarships.  Four of them are profiled below. They are all very grateful for the scholarships and say that it has made a huge difference in their lives. 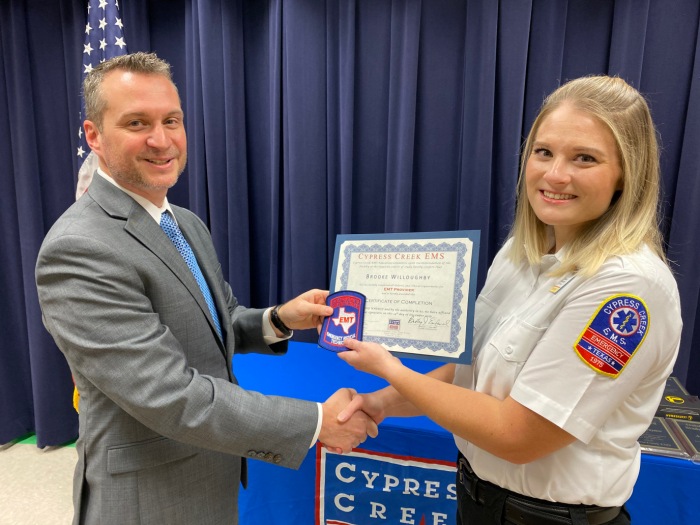 Brooke Willoughby is a single mother of four…three boys and a girl ranging in age from 9 to 16. She says without a full scholarship there would be no way for her to afford paramedic class. She worked in EMS in Washington County but let her EMT certification lapse when child number three was born. Last year, she saw a Cypress Creek EMS social media post about the upcoming EMT Class and she decided it was time to get her patch back.

Upon graduation in December, she applied for the Paramedic Class and was one of four from that EMT class who was accepted. No one in Brooke’s family is in medicine, but there are police officers. Her dad was an HPD officer who was involved in Honor Guard and SWAT.

Brooke met a lot of first responders when she was hanging out with her dad. Among them were medics and she became fascinated with what they did. She plans to get a job at CCEMS and graduate from the Paramedic Class. In the future, she’d like to be involved in disaster planning but, for now, she wants to get on an ambulance, first as an EMT and, after graduation, as a paramedic. None of this would be possible without a full scholarship and Brooke is very grateful for the opportunity. Brooke grew up in Cypress and always heard great things about Cypress Creek EMS, so her decision on where to go was easy. 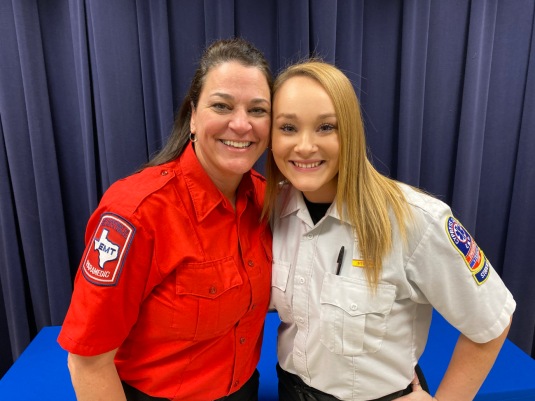 Katelynn and her mother, Christy Rhodes

Katelynn Traynor could very well have emergency medicine in her DNA. She grew up with both her mother (Christy Rhodes) and father (Kevin Traynor) working as paramedics at Cypress Creek EMS and both her grandmothers are nurses. Katelynn graduated from the EMT Class at CCEMS in December and immediately applied for the paramedic class.

Katelynn says, “The scholarship has made it easy for me to focus on school more and not worry about finding money to pay for the class. It has given me a sense of calm and has helped tremendously with the overall cost of the course. She adds, “I have always had the mindset that I will make it work with any difficult situation. I know I could’ve managed without the scholarship. The difference it made though was incredible and it has contributed to my success in the class.

In the future, Katelynn plans to work as a paramedic and continue to build on the skills she learns every day. She says the whole aspect of helping someone on possibly their worst day is very fulfilling to her and that helping people has always been a passion of hers. 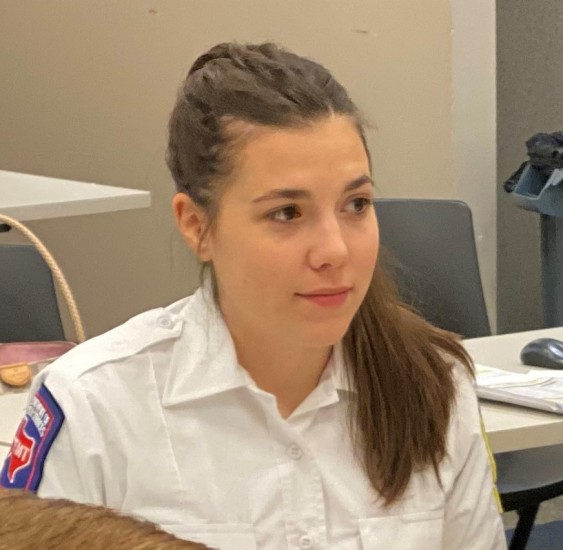 Bethany Pebworth has worked for Cypress Creek EMS for three years at an EMT-Intermediate. She says she chose CCEMS because of its reputation for cutting edge prehospital medicine. She initially thought she wanted to be a firefighter, so she got her EMT patch because she knew it would be required. Then after working at CCEMS for a while, she discovered that EMS was what she really wanted to do. The next step was to become a paramedic so she applied for the CCEMS Paramedic Class. 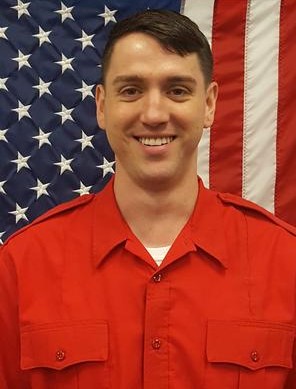 Steven Beesley has been an EMT with Cypress Creek EMS since August of 2018. He and his wife Kayla have a two-year-old son. In deciding to go apply for the Paramedic Class he had to figure out finances. He says, “I was more than a little worried about finances because class takes away a lot of the time that I was able to take overtime. It changes the amount of money that I make, so knowing that part of the class is taken care of takes a lot off my plate and that I can’t even begin to describe how valuable that is.”

Without the scholarship, he says he’d have to work overtime which would have taken time away from his family and his studies.

Steven served in the Army for eight years and during that time he was impressed by some fellow soldiers who were Army medics. One of them has gone on to become a Physician’s Assistant. Steven got his EMT training at Houston Community College and went to work at CCEMS because of its reputation.  Steven has his sights set on becoming a supervisor and, further down the road, he’d like to teach future medics.